A Hilarious Story About a Pit Bull’s Encounter With a Pineapple!

Stella is a beautiful velvet gray pit bull that found a terrible monster lurking in her mom’s kitchen one day.

Upon entering the family kitchen, Stella found a ferocious pointy looking thing poised on the countertop.

Its head had protruding arrows of green. All over its body were prickly scales that hid what was inside. But where was the face?

There were no eyes, no mouth, no nose!

Stella figured she needed to alert her mom immediately to the danger of this evil thing.

If she barked hard enough, maybe this monster would go away. However, no matter how hard she barked, it just sat there.

Mom grabbed the pointy monster and put it on the floor. Stella had a better vantage point to attack and run this thing out of their house.

She barked, she pranced and pounced, but it just sat there.

Eventually, Stella realized she was going to have to move in closer to investigate and see what this thing was.

As she came within inches of it, she was taken back by its sweet candy-like aroma.

“Hmm, maybe this isn’t so bad after all,” she thought.

After sniffing and giving it a few licks, she determined that the pineapple monster was friendly and went on about her business as usual.

We can’t help but laugh at how pit bulls perceive inanimate objects as something different.

Another pit bull named Moose also suffered the ‘freaky deekies’ from a pineapple.

It just goes to show you that a pineapple is capable of reducing a so-called ferocious pit bull to a playful and curious little puppers! 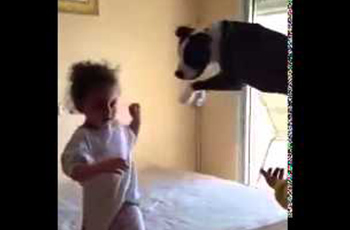 Pit bull does the same thing his sisters did. Over in …

The sweetness of two pit bulls change the negative perception …