The stereotype that pit bulls are dangerous certainly rang true the day Daniel Wright and his service dog, Tank, tried to board a public bus.

Tank is a pit bull who has undergone rigorous training and certification to be a military service dog for the veteran.

Daniel Wright is an 11-year veteran who served as both a marine and with the army. He was awarded the Purple Heart during his duty.

During combat in Iraq, an IUD exploded injuring the soldier’s left arm severely. To date, Wright has had to undergo nine surgeries, on his arm.

Because he is disabled, he relies on Tank to function as his hand and arm in opening doors, maneuvering elevator buttons, and retrieving things that Wright needs such as medication, TV remotes, shoes, etc.

Coming home from school one day, Wright and Tank waited for the bus. As the bus stopped, others were getting on.

However, as Wright and Tank went to board the bus, the driver told him that dogs were not allowed on the bus.

The door slammed shut, and the bus continued on.

Fortunately, the next bus that came along did let Wright and Tank on with no problem.

When the incident took place, Tank had the required service vest on which was visible to the driver.

There was no mistaking that he was a service dog. Wright filed a formal complaint with the New Jersey Transit System.

One of their officials phoned Wright offering an apology and assured him that the bus driver would be disciplined for denying them the right to ride the bus as well as his rude behavior.

According to the American Disabilities Act (ADA), all service dogs, regardless of their breed, must be allowed to accompany their owners on all modes of public transportation as well as public places.

These dogs undergo training to be able to assist their owners in mitigating difficult tasks, as well as alerting to medical conditions.

If it were not for the loyal assistance of service dogs, most of the owners would not be able to lead an independent life.

There are hundreds of other pit bull service dogs that are denied access to public travel.

One such case was in San Francisco where a pit bull service dog and his owner encountered problems on a rail car.

The animal warden officer told a military veteran and his service dog that the dog had to be muzzled.

After contacting the Lakewood Police, the veteran was further told that he had no right to have the dog in their city because it was a pit bull.

Pit bulls were a banned breed in the town at the time the incident took place. The ban has been overturned.

As for Wright and his service dog, Tank, they along with thousands of other pit bull service dogs and their owners will continue to be denied their rights based on the dog’s breed. 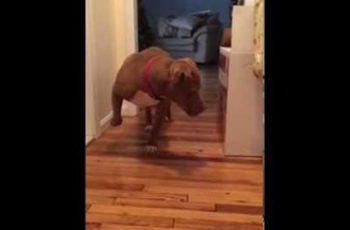 Redd the pit bull does everything he can not to … 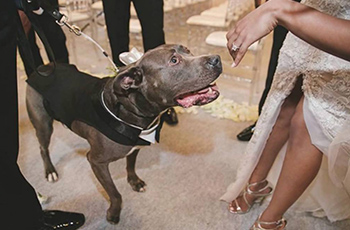