Meet Apollo The Pitbull and his human, Brittany:

Apollo is a perfect example of Pitbull Resiliency. He was found on January 21st, 2015 by an employee of a construction landfill in Houston, Texas. This employee was Apollo’s first step towards a better life. Brittany Faske was a volunteer for a rescue group called ADORE (All Dogs Official Rescue Enterprise of Houston). Brittany is the one who received the call from the landfill employee reporting “a dog hiding in the bushes that was missing half of his face.”. Faske and the Director of the ADORE rescue group considered what the employee said and prepared themselves for a rescue that would soon be laid to rest. Upon their arrival, the rescue team observed Apollo from a distance.

Apollo sat amongst the trash, timid and cautious. This was likely where he had been left by his owner. Faske and the rescue team began approaching him slowly. As they moved closer, they were able to see and smell Apollo’s various problems. “This once gorgeous, large dog had been reduced to almost nothing,” Brittany explains.

She then describes his injuries and other obvious health concerns that she was able to note as she approached Apollo. He showed clear signs of malnutrition by the way that his ribs, backbone, and hip bones were visible.

Malnutrition is also commonly known as malnourishment. This is a condition that occurs when the body lacks essential nutrients. It is usually caused when someone does not eat a well-rounded diet (poor diet), as well as when someone suffers from a digestive condition or another disease.

Apollo was filthy, completely covered in dirt and garbage. He was too weak to run, but he was able to walk gingerly. As the rescue team inched their way towards the pup, they were able to hear his faint warning growl as well as get a better look at the nose and snout that had been hacked off. “It was as if someone had taken a knife and cut off the front of his face.”.

Unfortunately, Apollo’s previous owner is likely to blame for these wounds, his lack of a proper muzzle, his current living situation and for leaving the gray collar around his neck to show everyone that he was not always a stray living at the landfill. 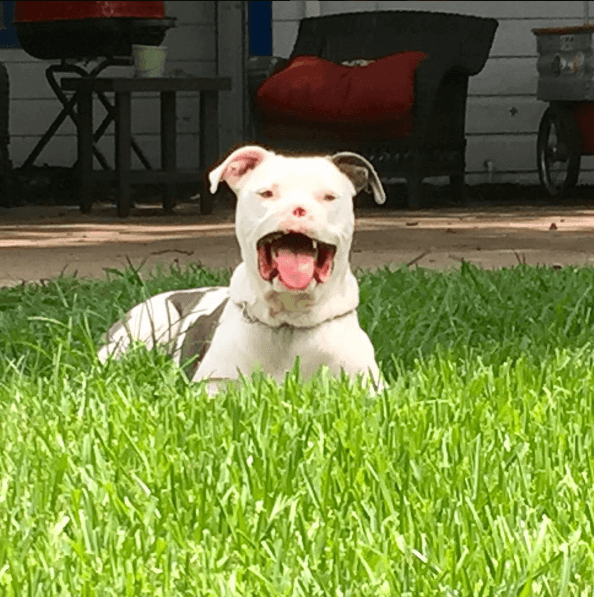 Brittany also describes a smell that radiated off of Apollo’s face. She knew it meant that his injuries were deeply infected and that he required immediate veterinary care.

What is the smell associated with infection?

The odor that is associated with infections is caused by metabolic end-products of anaerobic organisms (mostly organic acids).

Once the slip lead was on, Apollo relaxed, the faint warning growl subsided, and he happily welcomed the ADORE rescue team’s help. Apollo slept the entire ride as he was rushed to an animal hospital.

Once at the veterinary hospital, Apollo walked around like it was any other day. As if nothing was wrong. “He was trying to sniff people and even interact with other dogs,” Brittany says. As good as Apollo was doing, his outer injuries and potential problems yet to be uncovered were undeniable. The rescue team still feared that humane euthanasia would be the end result.

What is humane euthanasia?

Humane Euthanasia involves the use of medical methods that safely and painlessly assists the animal into death. This option is often used when surgery or other medical treatments are not working, if the animal is in severe pain that cannot be relieved, or if a condition is untreatable.

As the veterinarian began collecting Apollo’s information, they discovered that he only weighed 28 pounds (far less than a healthy male Pitbull should weigh). He was clearly malnourished, tested low positive for Heartworms and they determined he was likely about a year and a half old. Next, the team offered him dog kibble and water.

This was a test to see if he was well enough to have an appetite as well as thirst. Apollo surprised everyone by finishing two bowls of kibble and drank plenty of water without hesitation. “After eating, he walked up to me and laid his head on my leg. From that moment on, we knew he wasn't just another dog.” Brittany explained.

What does all of this mean for Apollo?

A Heartworm diagnosis is never something a pet owner wants to hear. Heartworms are parasites that have spread from a host (usually mosquitos) into the bloodstream of an animal. These parasites are difficult to cure and easy to prevent. It is not uncommon for animals diagnosed with heartworm to pass away. Luckily for Apollo, the condition was still in its minor stages and was, therefore, treatable. 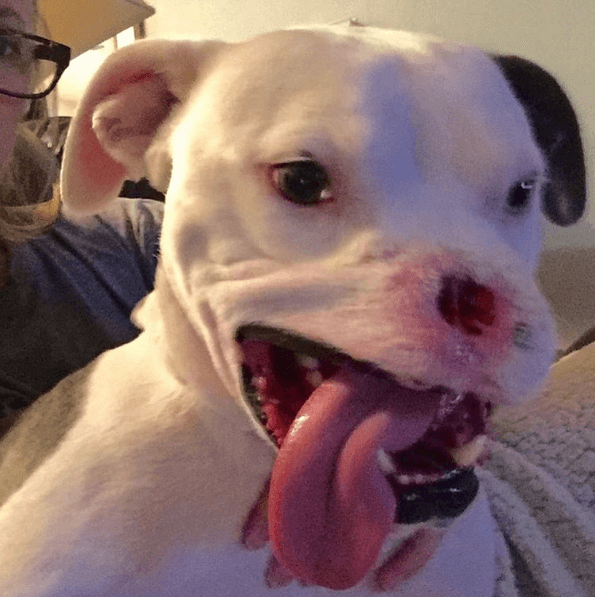 The fact that Apollo was not only accepting of food and water but that he consumed so much of it is a clear sign that he was still able to become thirsty as well as have an appetite. When an animal no longer has an appetite or desires water, it could mean that the prognosis for the animal is extremely poor.

Brittany decided to take Apollo to another veterinarian for a second opinion. She and Apollo were forming an unbreakable bond, and she could not help but want the very best care for him. Apollo was started on a Heartworm treatment plan, undergone facial reconstructive surgery, skin grafts, as well as ACL surgery.

What does all of this mean for Apollo?

If a heartworm diagnosis is made early enough then the animal can be put on a round of steroids, heartworm preventatives, and antibiotics. After this round of treatment, he will likely require a round of adult heartworm treatment that can take up to two months to complete. This part of the treatment often involves shots that are given to the animal in order to kill the parasitic worms.

Facial reconstruction will vary depending on the veterinary surgeon as well as the severity of the damage. The veterinary surgeon will need to choose the best course of action that is not only safe for the animal but, it also should provide the animal with the best outcome. In Apollo’s case, the veterinary surgeon was able to almost entirely reconstruct his muzzle back to normal and was able to do so in such a way that he could still use his remaining nasal passages as a nose. This type of surgery is often very costly, and the recovery can be very time-consuming. Apollo’s surgeon was able to do much of the work with the help of skin grafts which are useful pieces of skin that are transplanted from another part of the body onto the wounded area.

ACL surgery is surgery performed on the anterior cruciate ligament. This ligament can be damaged when an animal twists on the hind leg with too much motion which results in tension and tearing of the ligament.

Once Apollo was recovering and ready to be released from the hospital’s care, Brittany adopted him and gave him a Forever Home! However, before Brittany could bring him home, she needed to run it past the other two male dogs that she had at home.

She brought in her two, 10-year-old pups that she describes as being grumpy old men. Brittany feared that if her current dogs were not accepting of Apollo that he would have to be placed for adoption, and he may be overlooked because of his unfortunate history. Not to mention that she did not want to lose the friend she had made in Apollo. Luckily, Apollo and her two grumpy old men were very accepting of each other. Apollo now lives with Brittany, five furry siblings, and one foster sibling. He adores children and enjoys going for a car ride. 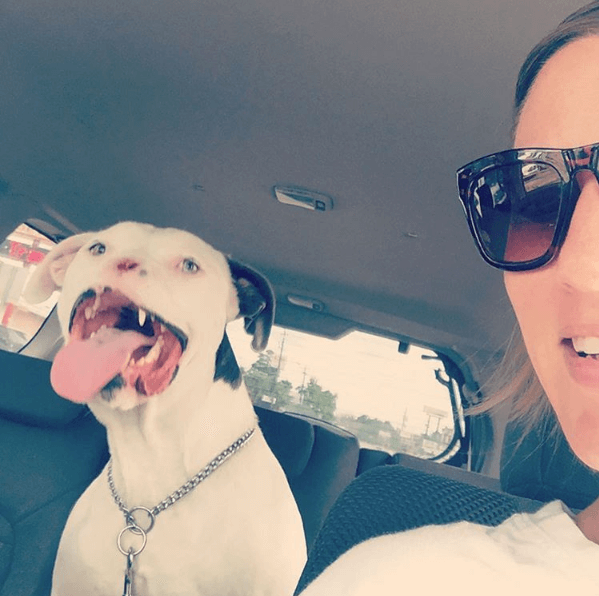 Since adopting Apollo, Brittany has enrolled him into behavioral and obedience training programs. To date, Apollo has completed two levels of basic obedience training and participates in a special training group known as Dean’s List. Dean’s List is a doggie program provided by the Total Control K9 College. They have taught Apollo to be confident, to be sociable and overall how to be a dog again.

The previous “owner” of Apollo could have taken away his ability to love or trust humans ever again. However, Apollo was able to rise above the past and was resilient enough to love, and trust those who deserve it.

Apollo may have been mistreated and severely abused by his previous owner that gave him the gray collar, but he will never have to feel that pain again. He will never be harmed, neglected, or abandoned again, thanks to Brittany Faske, the landfill employee, and the ADORE rescue team. Apollo can live a healthy, happy doggie life with his new family thanks to the veterinary staff that worked on him and cared for him. Apollo was given a second chance at life; he was given the loving home and family that he always deserved to have.