Miniature Pitbulls or Pocket Pits as they are playfully known, are a relatively new dog breed. This mixed breed pooch was the result of an American Pitbull Terrier and a Patterdale Terrier mating.

The Patterdale contributed their short stature as well as a few of their personality traits, while the American Pitbull Terrier added his appearance and several of his personality traits as well. Mixed breed dogs are not recognized by the American Kennel Club as a “breed” because they are not purely one breed or another.

This is also the thought behind why it is hard to pinpoint the personality traits, physical appearance, and other aspects of a mixed breed puppy simply because he could acquire his traits from either purebred parent. So, when describing the Pocket Pit, one must do a doggie background check and investigate the source. 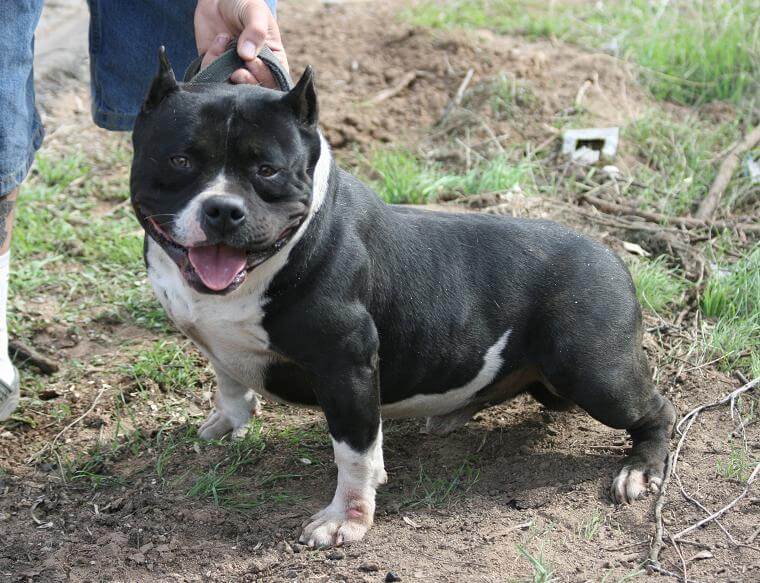 These solidly-built pups are not known for their height, but rather for their strength. The American Pitbull Terrier is loyal, friendly, intelligent, and most of all they are affectionate. They are widely feared because of their history of dog fighting and aggression. However, people seem to forget that, in general, Pitbulls become aggressive for one of two reasons. These reasons are:

They train them from puppyhood to address certain situations in a negative way. Therefore, when they become adults, the dogs will become aggressive as their owners order them to be.

If an American Pitbull Terrier is adopted by the right family and is socialized, trained and loved the way they deserve to be then that family will have one of the most loving, obedient, and courageous four-legged family members that they could ever ask for.

These pooches should never be overfed as they have a tendency to pack on the pounds (especially as they get older). When an American Pitbull Terrier is fully grown, he should weigh about 60 to 70 pounds. Be sure to follow a healthy diet.

They can also stand about 20 inches tall on all fours when they are fully grown. Pocket Pits should not acquire these traits from their purebred Pitbull parent. If a Pocket Pit stands at 20 inches tall when he is fully developed then this pup will not be considered a Miniature Pitbull, but rather a Pitbull Mix. However, the Pocket Pit will very likely be affectionate, courageous, and intelligent because of their Pitbull parent.

These British pooches are very popular in Northern England. They were introduced to North America. However, they are not nearly as popular here. These Terriers have a long history of being working dogs. They are incredibly eager to work hard and “get the job done”.

If a Patterdale Terrier does not have a job to do, then he can become bored very quickly, and a bored dog is a destructive dog. While they may not intend on ruining your favorite pair of slippers, they may very well do so simply out of boredom.

The Patterdale is a confident pooch that is full of energy and ambition. They are a very intelligent breed that loves a challenge! His owner should always continue his training whether that include games or providing jobs for him to do. They are also very inquisitive and would prefer to be involved in everything their owner does.

The Patterdale is a wonderful guard dog. He has a long history of defending his turf as well as assisting his owners during hunting or fishing trips. He instinctually retrieves the fallen game or catches gently as not to damage it. He is also a fantastic dog to have as a helping hand around the farm. He will help you herd sheep or attempt almost any job you give him to do.

So how big do Miniature Pitbulls get? They are a little Terrier breed only standing between 10 inches and 15 inches tall when fully grown and on all fours. They are an athletic and slim dog as they should be. Overfeeding a Patterdale would likely create health problems for him and cause his little body distress.

How Big Do Miniature Pitbulls Get

Miniature Pitbulls or Pocket Pitbulls are meant to acquire their height from their Patterdale parent. If they do so then, this pooch will stand at 10 inches to 17 inches (maximum) when they are fully grown and standing on all fours. They may also acquire their hard-working trait as well as their confidence and energy.

Assuming that the Pocket Pit requires the American Pitbull Terrier parent’s affection, friendliness, courage, and protective qualities and combine them with his smaller stature, intelligence, and hardworking traits from his Patterdale parent then you could have an incredible companion and furry family member for many years to come!