Home
Good
A ‘Lil “Ditty” About Doogie the Pitbull

Doogie melts as his dad plays guitar and sings to him!

A Canadian pet-parent of a pitbull called Doogie manages to reach deep within the dog’s spirit as he sings to his beloved fur-baby.

It’s a sweet as can be to watch this dog hang halfway over his dad’s shoulder as he is serenaded to by his dad.

The more his dad plays and sings, the more Doogie melts, and before you know it, the dog has succumbed to hearing his dad’s sweet song.

“Doogie...I love you. I love the way you snuggle at night.

As a musician, Doogie’s owner writes and sings as a profession.

He is also a passionate animal lover and very close to Doogie and his canine sister, Mazer, who is also a pit bull.

Doogie has a dedicated Facebook page where his dad has captured hundreds of special moments with the pit bull’s comical antics and quiet contemplations on camera.

His dad is so devoted to Doogie that he wrote a song years ago about how it will feel to be separated from one another.

Little did he know that Doogie would succumb to the ravages of Cushing's disease as well as a brain tumor.

“I wonder why I don’t hear a sound,

I hope you’re okay because I am away.”

Doogie was 11 years old when he began to decline from Cushing’s disease rapidly. He lost so much weight that his ribs protrude outwards.

Mazer, his canine sister, sensed Doogie’s distress from being chilled one day as she covered Doogie with her body trying to warm him up.

Doogie’s dad caught this on camera with no one around to witness the beauty of the dog’s relationship.

Sadly, Doogie had to be laid to rest one day when he could no longer physically continue on.

His dad has grieved the absence of his best friend and companion.

Greetings of sympathy from all over the world flooded in as other dog-parents shared their own story of losing their dog.

Doogie is a loving example of the sweet nature that a pit bull can have if raised in a nurturing home.

It’s a joy to be able to share in the memories of Doogie on his Facebook page.

Here you can witness the playfulness, emotional expressions, and quiet times that Doogies dad has documented as a loving tribute.

The sweetness of two pit bulls change the negative perception … 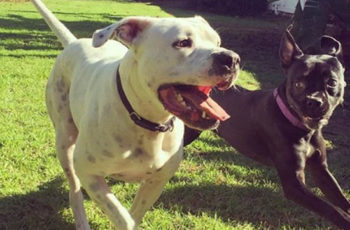