A Blue Nose Pitbull or Blue Pits are rather hard to find even though they continue to grow in popularity.

This “breed” is not recognized as a separate Pitbull breed but rather just an additional color variation to choose from. However, this color variety seems to be rapidly gaining popularity, and they appear to be selling for big bucks!

Unfortunately, Blue Pits are not as accessible as other variations and therefore, some breeders will resort to inbreeding in order to continue making money.

So, before you buy a Blue Nose Pitbull puppy, do your research and find a reputable breeder. Let’s discover more about these rare beauties!

History of the Blue Nose Pitbull

Keep in mind that the Blue Nose Pitbull is hardly any different from other variations of the American Pitbull Terrier.

The history of this particular color variety is not specified.

However, the American Pitbull Terrier originated in England and was used to bait bulls and bears during a fight.

When this sport became illegal, the dog owners began encouraging their d​​ogs to fight one another.

This unfortunate history is much of the reason for the fear people have in regards to the breed. 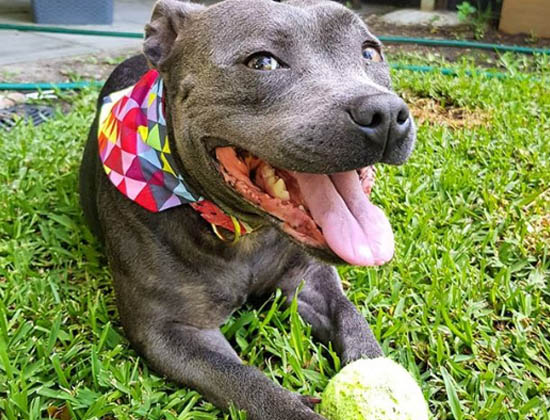 However, every dog is unique, and it is up to each owner to help their dog be the best they can be.

If an owner instills aggression, negative energy, and praises bad habits (such as barking at the mail carrier, jumping or snapping at people, picking a fight with another dog, etc.), then the dog will continue the behavior.

Dogs, regardless of the breed, instinctually want to please their masters.

If fighting another dog or frightening a human being makes their owner happy then the dog will continue to do so.

Alternatively, if you raise a dog in a positive environment and allow him to be his naturally loving, affectionate, protective, and courageous self, then you will have an excellent new member of the family. 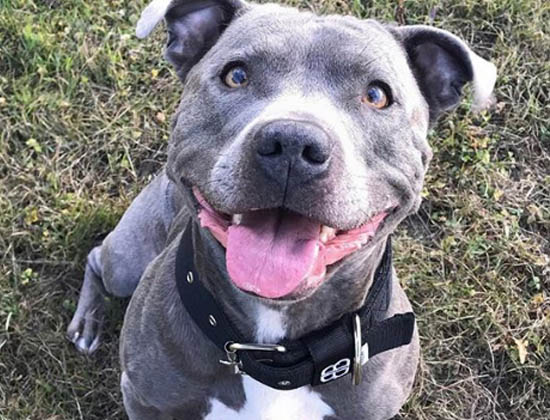 The bluish gray coloration is due to the lack of black pigmentation being passed down to the puppy from the parents DNA.

This lack of pigmentation is considered a recessive gene which can only be passed on to puppies if both parents are carriers of the gene.

Meaning, that both parents must be Blue Pits to create Blue Pit puppies.

Unfortunately, this recessive gene is somewhat difficult to find and therefore, many breeders will use inbreeding to make a quick buck.

Personality and Temperament of the Blue Nose Pitbull

Blue Nose Pitbulls tend to demonstrate many of the same personality traits and temperaments as any other Pitbull color variation. 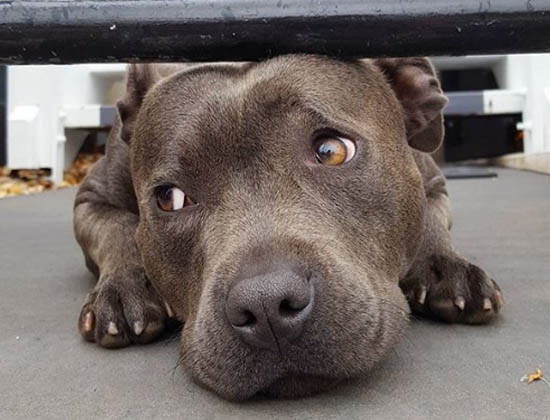 However, many Blue Pit owners report a unique sweet-natured character about them that is not uncommon for the breed, but, seems to be particularly heightened in this color variety.

The reason and science behind this are not known.

Pitbulls, in general, can be docile creatures and can exhibit various positive behavioral traits that any other dog breed can, especially if they are properly trained and socialized.

They do not hesitate when danger is near, and yes, they will become aggressive and may even fight the threat to the death if it comes to that.

It is vital that you understand this type of aggression comes from a place of fear. 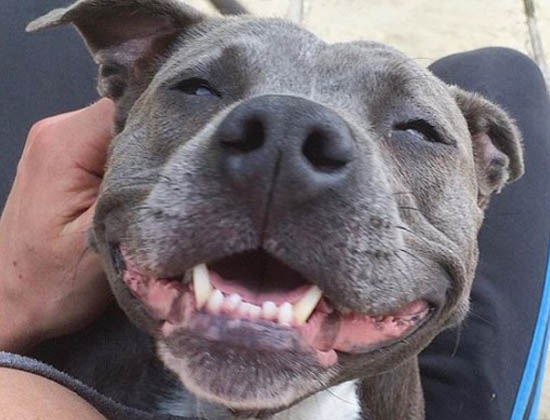 Fear for their own safety as well as the safety of their family members.

There are a few factors to consider when it comes to feeding a Pitbull. One of which involves choosing a kibble that is formulated for their stage of life.

For example, if he is still in his puppyhood then you should choose a quality dry puppy kibble.

Puppyhood generally lasts until the dog reaches his first birthday. However, some veterinarians feel differently.

Check with your veterinarian about feeding based on stages of life for your individual dog. 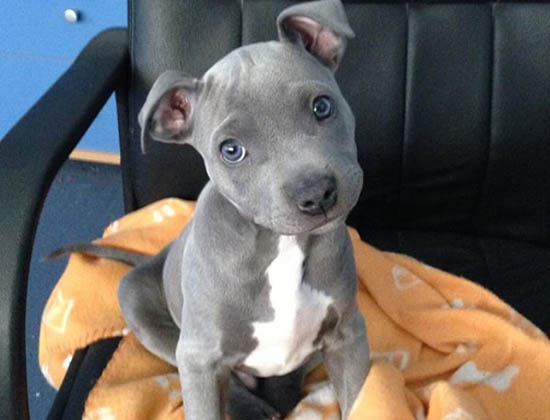 If he is a couch potato, then you will need to choose a kibble that is low in calories and fat to prevent obesity.

On the other hand, if he is your jogging buddy then he should be eating a formula produced for active dogs.

Canines are carnivores and therefore the dog kibble you choose should contain about 30% protein and about 10% fats.

By reading the ingredients list and nutritional facts labels on the packaging you should be able to decipher what is in the kibble.

Caring for the Blue Nose Pitbull

Exercise: Pitbulls, regardless of the color variety, require a lot of intense exercises. They should walk, jog, swim or play a game of fetch a couple of times a day to release their pent up energy.

Habitat Requirements: Pitbulls do not do very well in an apartment setting. In fact, many apartment complexes do not allow them on the premises. Therefore, you should only consider a Pitbull if you own your own home that has a reinforced fenced in yard.

Training: Training and socialization should begin with puppyhood and continue for much of his life.

An untrained or non-social dog is usually not what one expects when owning a dog.

Dogs are meant to be included in our daily activities and are intended to be part of the family, not cower under a couch, be timid, or aggressive when others are near.

Grooming: Regular brushing will reduce shedding, especially during the warm months of the year. Bathing should be done as needed, but monthly baths should be okay.

Here Is A Fleeting Glimpse Into The Blue Nose Pitbull!

How Big Do Blue Nose Pit Bulls Get?

How Big Do Blue Nose Pit Bulls Get?

How Much Do Pitbulls Cost?

Pitbulls regardless of their color variety can be wonderful family pets if they are trained and socialized properly.

They require a strong pack leader (that would be you) to keep them in line, and if you present yourself as such then he will love, defend and respect you. Blue Nose Pitbulls are sometimes the result of inbreeding so do some investigative work on the potential breeders before you bring home a new puppy.

When you do bring home a new Pit puppy, treat him right.

If you do, you will not only have a loving best friend for life, but you will have a companion that would have your back to the very end.

Blue Nose Pitbulls are not a separate Pitbull breed. They are simply one of the many color variations of the American Pitbull Terrier. Some breeders will attempt to raise the price tag on Blue Nose Pitbull puppies and label them “rare” or “unique.”

Blue Nose Pitbulls can suffer from a variety of health problems. These can include allergies, mange, alopecia, heart diseases, cataracts, immune disorders, and neurological disorders. Potential adopters should be aware of these conditions as well as how to prevent them.

Blue Nose Pitbulls tend to have a bad reputation. People that have very little experience with a Pit will label them as ferocious, dangerous, and aggressive. However, Pitbulls are naturally sweet, loving, and gentle dogs. Those that display the negative behaviors are trained to do so by their owners.

Blue Nose Pitbulls are very playful and active dogs. They require a lot of exercise and playtime each day to wear them out!

Many owners will describe their dog’s emotions as “human-like.” Pitbulls often demonstrate empathy, compassion, and even stubbornness towards their humans.

Blue Nose Pitbulls are excellent dogs to have around children. They are the original “nanny dog, ” and while they look intimidating, they are playful, protective, and patient with kids. They also appear to have a high tolerance for However, dogs (regardless of breed) should always be supervised with children.

The Blue Nose Pitbull may be seen as a muscular dog (and he is), but he is also very intelligent! He’s the brawn and the brains! They are generally very easy to train and will respond well to positive reinforcement.

Blue Nose Pitbulls are only good watch dogs because of their intimidating appearance. They are far more likely to lick your house guests to death than to attack without cause. However, this is not to say that Pitbulls are not protective. They are sure to defend their families, their territory and themselves if the occasion called for it.

Surprisingly, the Blue Nose Pitbull is prone to sweating! Their high activity levels and the need for exercise may mean that they sweat frequently. Therefore, owners should be prepared to bathe their pooch to avoid a stinky dog.

Do you have other fun facts about the Blue Nose Pitbull? If so SHARE your comment below.

Find out about the Red Nose Pitbull.