The American Pitbull Terrier is the most misunderstood dog breed in the world. 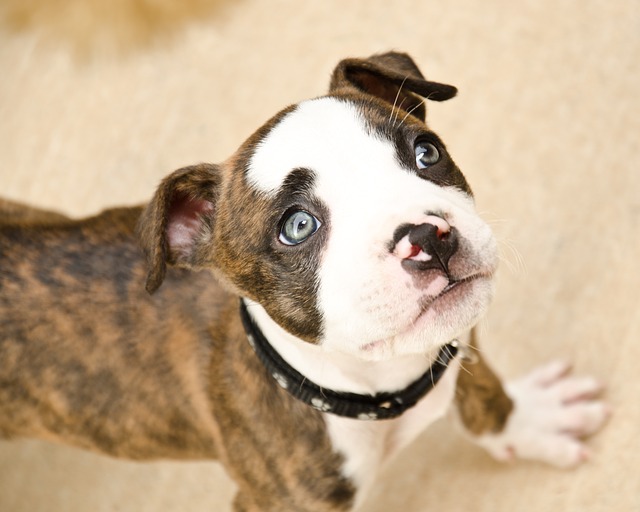 They come from an unfortunate history that has created a stigma and fear of the breed.

American Pitbull Terriers are truly fantastic creatures that, if given the chance, could make the best four-legged family member, protector, and friend that anyone could ask for!

The problem is that many people are not knowledgeable about the breed and simply believe in the stigmas and fear.

Knowledge is power, and taking the time to get to know this incredible, goofy dog breed could be just the ticket to changing the world for American Pitbull Terriers everywhere! 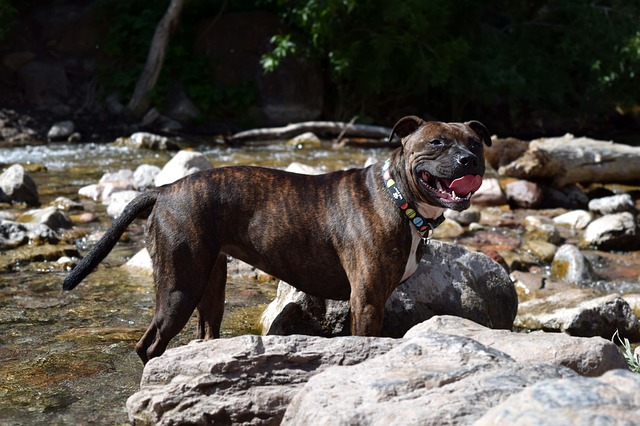 Brindle Pitbulls are very interesting and unique even though many of their characteristics are standard to the American Pitbull Terrier breed.

Let’s dive into the Brindle Pitbull and find out 12 more things about them!

1. Grooming a Brindle Pitbull is not hard work

An American Pitbull Terrier’s coat (and a Brindle Pit bull’s coat) is short, smooth, and is rather stiff to the touch.

These dogs are not heavy shedders which mean that grooming them is a cinch!

You may notice that they shed more during the warm months of the year but this is completely normal for any animal with fur.

Owners should try to manage the shedding by brushing their Pitbull a few times each week or as often as the owner prefers.

American Pitbull Terriers do not need to see a special dog groomer to have their fur trimmed or shaped which not only makes the breed low-maintenance but it also saves on grooming costs. 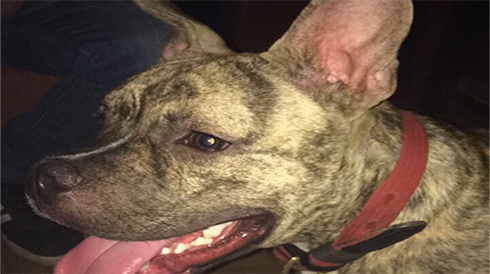 In fact, grooming an American Pitbull Terrier is so easy that you may not even need a professional groomer! Basic grooming methods should suffice.

Brushing a Brindle Pitbull should be done with a firm bristled brush.

Be careful not to brush your pooch too aggressively as their fur is not thick enough to absorb the impact and you will end up hurting him.

As previously mentioned, brushing should be done a few times each week to help maintain the amount of loose fur that is found around the home.

If the weather is particularly warm then you may want to increase the brushing sessions to every other day or daily.

Bathing your Pitbull does not need to be a regular chore. A monthly bath should be enough to keep him clean.

However, some owners prefer to add a dry shampoo session between baths. 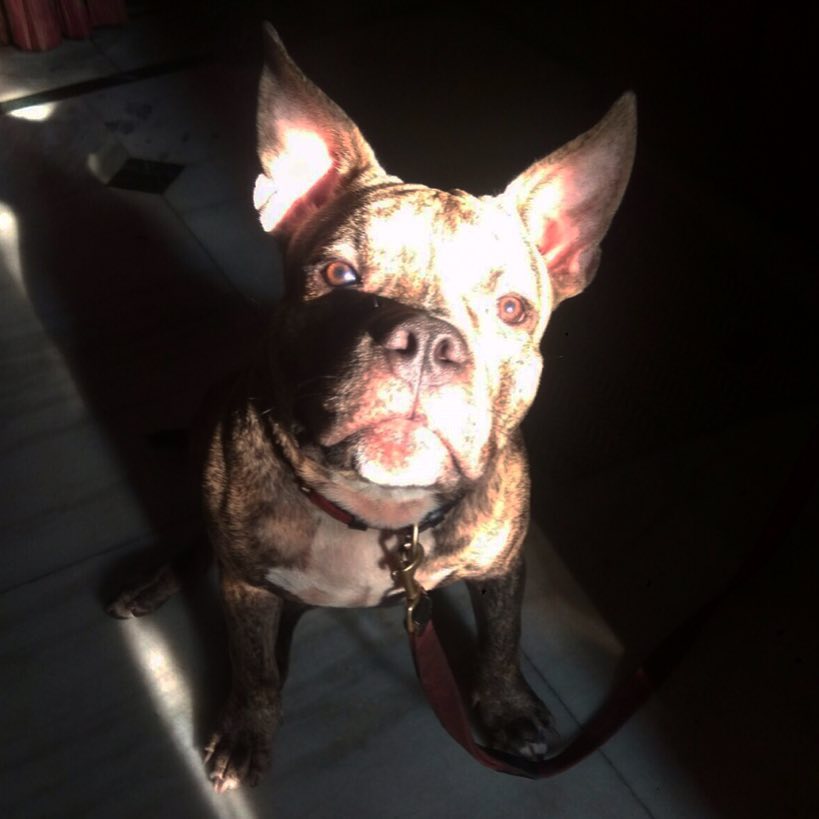 Some owners also rub their Pit bull’s fur with chamois to help keep the coat shiny.

Other basic grooming that should be done includes ear cleanings, flea and tick treatments, nail trimming, and teeth brushing.

Their teeth should be brushed a couple times each week, and your veterinarian should be able to specify the frequency of the other tasks as they can vary depending on the dog and the environment that the dog is in.

2. Their fur coat pattern resembles the coat of other animals

The Brindle pattern of their coat is the primary difference between a Brindle Pitbull and other types of the American Pitbull Terrier.

The Brindle pattern appears in varying colored stripes that are typically brown, orange, and sometimes even white.

The stripes of the Brindle pattern make the dog look like a zebra or a tiger! 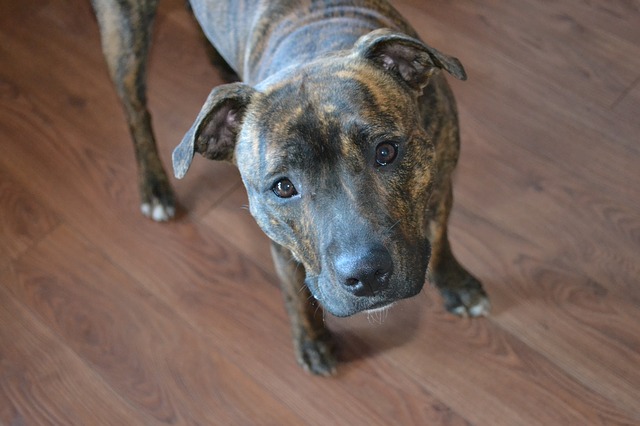 3. They may develop or be born with a health problem

Brindle Pitbulls (and all American Pitbull Terriers) are prone to certain health conditions.

Some of these conditions may be genetically passed down and others may develop over time.

However, if you adopt a Pitbull then you need to be knowledgeable of these possibilities.

4. The pattern of their fur coat has some interesting facts behind it

While the brindle coat pattern itself is not that rare of a feature, it is still quite unique.

Brindle coat patterns are described as being a recessive trait that is not able to be “chosen” during the breeding process. 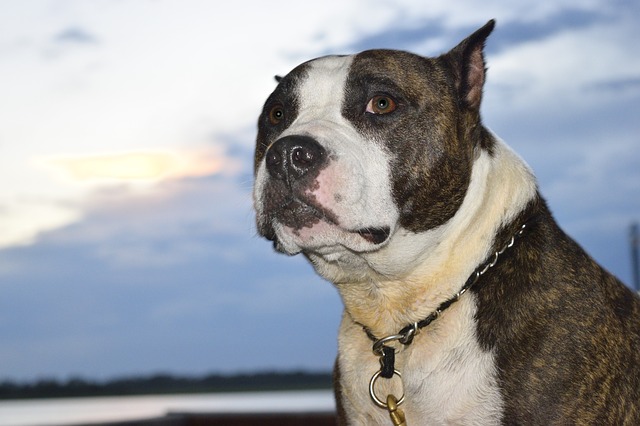 This is true of any coat colors or patterns.

Most of the time, the colors, and patterns of the fur that puppies are born with are completely random.

However, some breeders try to produce puppies with a specific physical appearance and will breed certain parents together with that intention in mind.

But still, most of the time it is all a luck of the draw!

5. Brindle Pitbulls have an unfortunate history

Brindle Pitbulls (like all American Pitbull Terriers) have an unfortunate history dating back to 19th century England.

At this time, there weren’t very many options as far as entertainment.

So, the people of 19th century England began breeding dogs that would be strong, muscular, fierce, and brave enough to bait bears and bulls.

The dogs that were bred for the job eventually became known as the American Pitbull Terrier.

These dogs would then be put in a ring, surrounded by the public watching in anticipation to see the dog bait the bear (or bull). 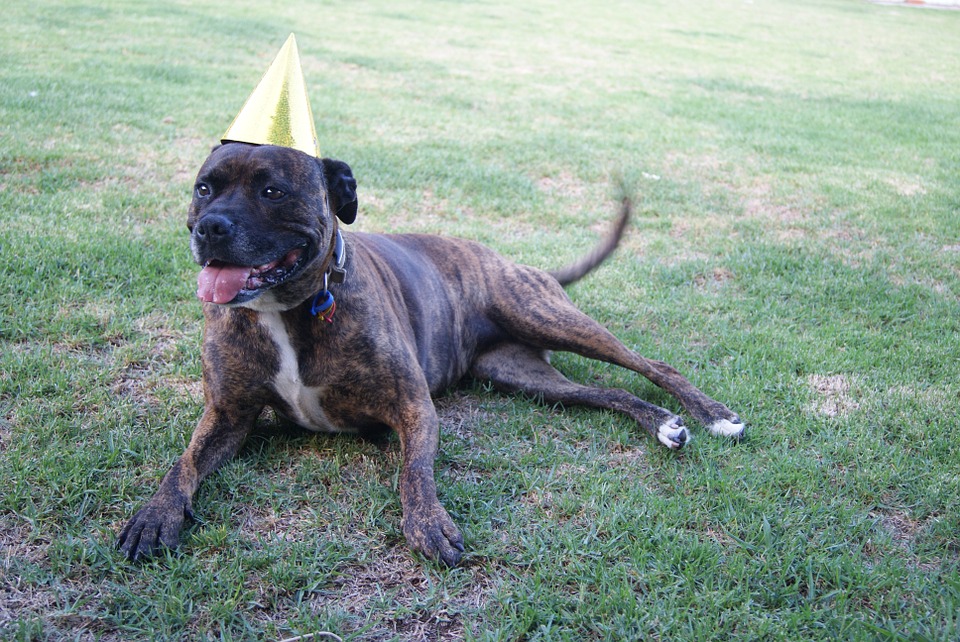 This blood sport became vastly popular among the English.

In 1835, bull-baiting and bear-baiting became illegal and was deemed inhumane for all involved.

6. They also have a lot of energy!

If you plan to own an American Pitbull Terrier then you should be prepared to provide him with plenty of exercises!

They are a high energy dog breed and they will release this energy one way or another.

Most owners would prefer that their Brindle Pitbull releases his energy outdoors by playing games, running, swimming, or hiking instead of indoors where he will release his energy by jumping on the furniture, chewing, and most likely breaking any number of household items. 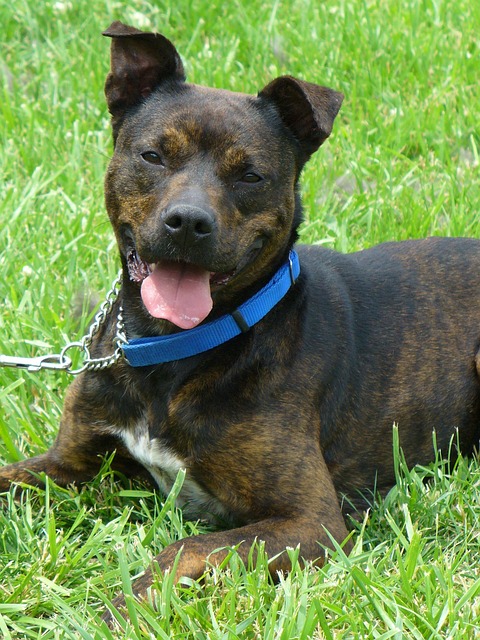 Not only do they have a lot of energy but they are also very muscular animals which make them a force to be reckoned with (indoors or outdoors).

Brindle Pitbulls should be provided with at least 30 minutes to 45 minutes of intense exercise and play each day.

7. They love their humans

The American Pitbull Terrier (as well as Brindle Pitbulls) has been labeled as “human haters” for generations due to their aggressive dog fighting past.

This is yet another misconception that has formed due to stigmas and fears based on the breed’s ancestral history.

The truth is that these pups absolutely adore their humans and would die to protect them.

Some Pitbulls have been known to be strong-willed, stubborn or a little disobedient simply because they were not properly socialized or trained.

Without proper training and socialization, the pup may exhibit unwanted behavior such as barking which could be interpreted as a dislike towards humans (or whatever the dog is barking at). With this in mind, owners should be prepared should their dog feel threatened, or feel that their property or family is being threatened.

If a Pitbull is feeling the need to stand and protect then the “target” will likely be attacked or intimidated at a moment’s notice.

They were once used to complete various tasks needed by farmers and they have even been labeled “the nanny dog” due to their fantastic nurturing ways with children.

However, the breed has also participated in jobs such as working alongside the police force, being seeing eye dogs, being an active and vital member of search and rescue teams, as well as protecting others alongside soldiers. 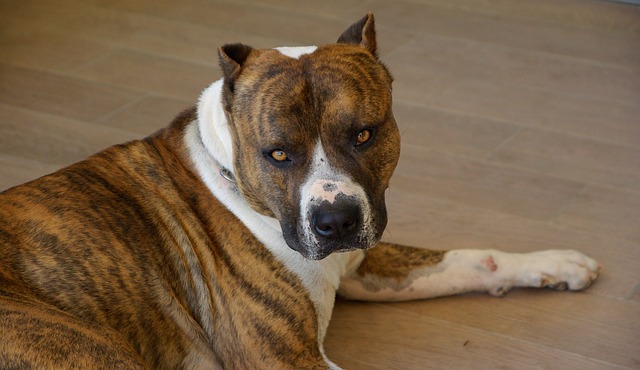 The American Pitbull Terrier (as well as the Brindle Pitbull) has come such a long way since their days of bull baiting, bear baiting, and dog fighting.

9. Not only do they require a strong owner, but they respect them

Pit bulls tend to be very strong-willed and stubborn if they are not properly trained.

It is highly recommended that the breed only is adopted by strong, experienced owners who are willing to put forth the effort it takes.​

Dogs are very intuitive and they will be able to figure out if their owner is the alpha dog or if the spot is open for the taking!

If this is the case, a Pitbull will not hesitate to try to take the position.

Therefore, it is important to be dominant, fair, consistent, and firm as an American Pitbull Terrier owner. 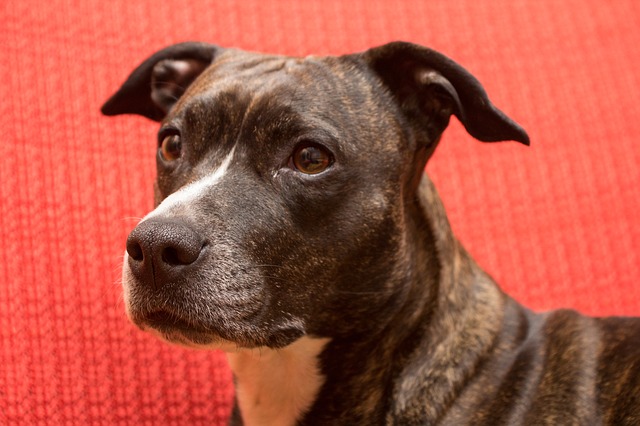 Not only will your Brindle Pitbull benefit in the long run, but he will also respect you and look to you as his alpha or pack leader.

10. Not your typical lap dog, but a lap dog nonetheless

As we have discussed, an American Pitbull Terrier has a long list of features that make him a powerful opponent for anyone he feels is a threat.

While it is true that Pitbulls will stand and protect, intimidate, fight, and even die if the circumstances called for such drastic measures to be taken, it is also true that these pups are sweet, docile, nurturing, affectionate, goofy, “class clown” type dogs that want to spend much of their time in the lap of their owner.

This is not a figure of speech. American Pitbull Terriers (and Brindle Pitbulls) are great big softies that have a hardcore exterior.

They enjoy being a lap dog even though they are far bigger than the “normal” lap dog breeds.

This is all thanks to today’s Pitbull breeders. Today the majority of American Pitbull Terrier breeders do not breed with the intention of creating a fighting dog. 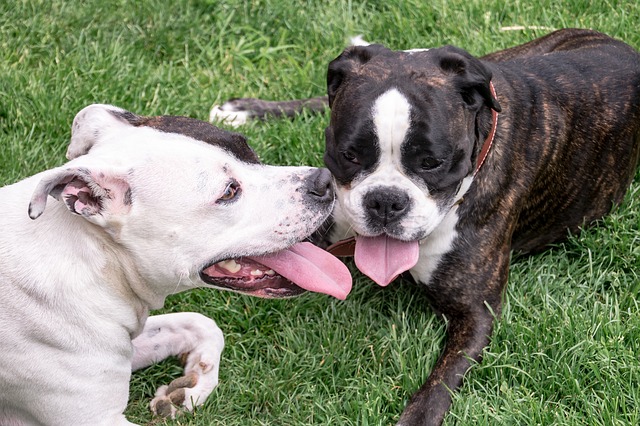 They are breeding dogs that will make excellent additions to any family!

They do this by emphasizing the positive attributes of the breed and enhancing their natural people-loving personalities.

11. They may not be welcome in every neighborhood

Due to the stigmas and fears associated with the American Pitbull Terrier dog breed, some landlords, homeowners associations, neighborhoods, districts, towns etc.​

have banned the breed from residing in a specific area. Unfortunately, this is far more common than you might realize.

Be sure to check with all laws and other outlets to make sure adopting a Pitbull and bringing him home is legal where you reside.

Brindle Pitbulls are enthusiastic, playful, loyal, loving, and happy dogs that can make wonderful additions to any family dynamic. 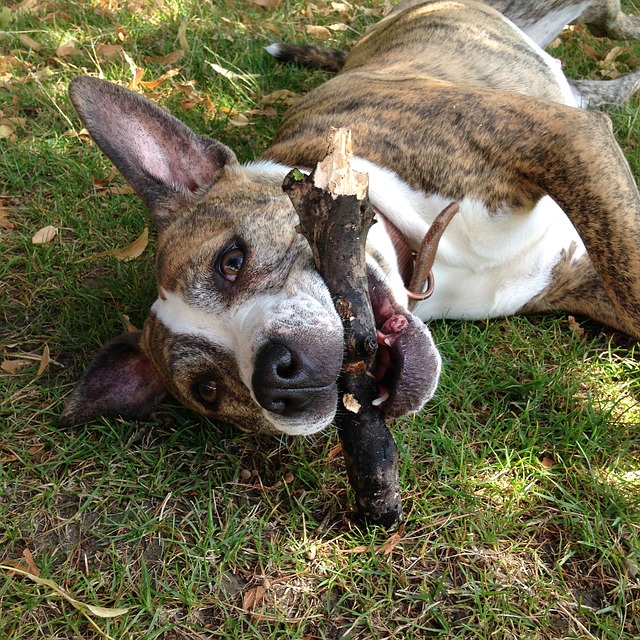 This is a dog breed that will remain obedient and loyal to their families for a lifetime so they should be treated with the same respect!